Previous Next
What is a Federal Tax Lien? 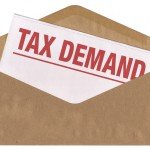